Impact of E-waste on the environment

One can get a handle on the severity of the e-waste problem by looking at a few statistics. The amount of e-waste being generated globally saw a staggering jump of 21 percent in just five years. The e-waste - which extends from old fridges to toys and even motorized toothbrushes - is the world’s fastest-growing domestic waste stream. The exponential growth in the consumption rates of Electronics and Electrical Equipments (EEE) is making the e-waste problem even more foreboding.

A record 53.6 million metric tonnes (Mt) of electronic waste was generated worldwide in 2019. Global e-waste monitor 2020 predicts global e-waste - discarded products with a battery or plug will reach 74 Mt by 2030, almost a doubling of e-waste in just 16 years.

E-waste is a health and environmental hazard, containing toxic additives or hazardous substances such as mercury,lead, cadmium, etc. which damages the human brain and / or coordination system.”

The E-waste problem in the developing countries

Asia alone generated the greatest volume of e-waste in 2019 at around 24.9 Mt, with India and China being major contributors. China produced about 10 Mt and is the world’s leading e-waste producing country followed by India in third position with an output of 3.23 Mt in 2019.

diverted to the black market and falsely classified as used goods to avoid legitimate recycling costs. Proof of the same? Is there a percentage of this diversion?

The Guardian reported that few countries understand the scale of the problem, because no track is kept of all e-waste, says the European Environment Agency, which estimates between 250,000 tonnes and 1.3 million tonnes of used electrical products are shipped out of the EU every year, mostly to west Africa and Asia. “These goods may subsequently be processed in dangerous and inefficient conditions, harming the health of local people and damaging the environment,” said a spokesman.

A United Nations Environment Programme (UNEP) reported in 2015 that approximately 90% of the global electronic waste produced each year, estimated at nearly $19bn, is illegally traded or dumped.

Impact of e-waste on environment and human health

E-waste in India is majorly processed using inefficient technologies, inadequate infrastructures, and improper and unhealthy ecosystems. Backyard operations of recycling, dismantling, and refurbishing use rudimentary technologies which include open burning of plastics, exposure to toxic soldering metals, dumping of acids, and employing child laborers for the process of dismantling. Further, no health safeguards or environmental protection of toxics releasing to the environment are taken into consideration.

In case of mismanagement in handling, treatment, incineration, and dumping of e-waste serious consequences to human health and the environment are observed. Thus, all e-waste is characterized as potentially hazardous waste in nature.

Damage to the soil, water, and air

Improper disposal of e-waste by residents or businesses into water bodies can contaminate the underlying groundwater. Any dependent ecosystem will be adversely affected by toxic groundwater. Such damages are extensively witnessed worldwide with severe impact on marine ecosystems. Humans who rely on this water are continuously exposed to carcinogens like lead, barium, mercury, and lithium.

Landfill disposal of E-waste sees that waste is burned by incinerators on site. This releases hydrocarbons in the atmosphere polluting the air and disrupting the ecosystem. Furthermore, these hydrocarbons can contribute to a major concern of global warming. For example - burning unwanted parts like wires to extract copper contributes to air pollution.

Printed circuit boards are imperative to electronic equipment and they are hazardous with constituents like lead (in solder), brominated flame retardant and antimony oxide. Open burning or leaching of these boards to recover valuables can be a source of pollution. Open crushing and burning of CRTs emits toxic fumes. Dioxins and furans are released while burning plastics out of poly vinyl chloride (PVC). Mercury used in switches, relays, old computers, flat screen displays can be released during open dismantling, incineration or landfilling in different stages of informal EEE recycling. The cadmium contents of mobile phones also have the potential to reach landfills or directly contaminate soil and water.

Primitive recycling techniques in the informal sector, such as burning cables for retaining the inherent copper, expose both adult and child workers as well as their families to a range of hazardous substances. Direct contact with harmful materials such as lead, cadmium, chromium, brominated flame retardants or polychlorinated biphenyls (PCBs) expose communities to several health problems. Major activities like dismantling of electrical equipment pose an increased risk of injury to the workforce.

The World Health Organization (WHO) has repeatedly raised concerns of the health risks from e-waste that children are exposed to. Children are at an increased risk of hazardous chemical absorption. Toxic substances can irreversibly damage the children’s body functional systems such as the central nervous, immune, reproductive, and digestive system. WHO reports, “Many children are exposed to e-waste-derived chemicals in their daily life due to unsafe recycling activities that are often conducted at their home- either by family members or by the children themselves. Furthermore, children may be exposed through dump sites located close to their homes, schools and play areas.”

WHO has launched the E-Waste and Child Health Initiative aiming at protecting children and their families from detrimental health consequences due to e-waste.

The e-waste problem is not slowing down any time soon and needs immediate and effective solutions. Handling and disposal of e-waste in underdeveloped countries is often unsafe and leads to contaminated environments. Implementing robust e-waste management solutions would enable us to move away from informal sectors and help the communities with cleaner and healthier alternatives to their method of operation.

bE-responsible is on a mission to create awareness of the impact E-waste has on our environment and living conditions and how with informed choices we can steer India on the path to a more sustainable future. 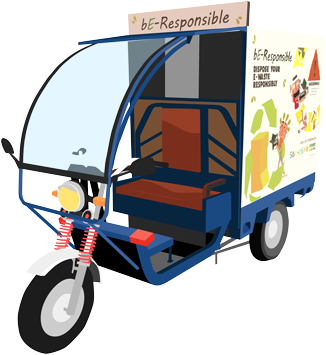 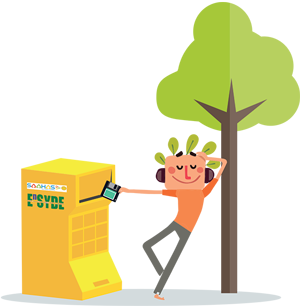